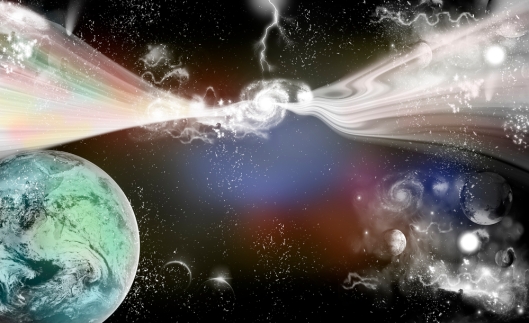 When I read articles and references about the universe and quantum theory, I have to tread lightly (loosely interpreted as, I’m way out of my league). My degree is in biological sciences. Physics and advanced mathematics had me shaking during exam time, but that was a hundred years ago. Reading Brian Greene’s, “The Elegant Universe”, and Richard Panek’s, “The 4% Universe”, took more than one sitting per chapter. Stephen Hawking’s, “Briefer History of Time”, a rewritten version of his earlier publication so nimrods like me might understand it, still sits partially read on my nightstand, mocking me for being a wuss.

So why do I torture myself? Because writing with science fiction elements today, one must be familiar with terms used in quantum theory 101 (or in my case, just “one”). What makes current quantum theory so much different, are recent discoveries that theoretically explain things we once made-up for fun. Fermions, bosons, black holes, wormholes, dark matter, dark energy, multiverses … neat stuff … though I’m sure astrophysicists have better descriptors than neat. And holy solar flare, Einstein’s theories are actually in question with discovery of particles traveling faster than light.

A recent review by WSJ’s John Gribbin, “The Loose Ends of the Universe“, summarized a book by Scientific American’s George Musser, with a title coined by Einstein to describe entangled particles, “Spooky Action at a Distance.” I like Gribbin’s reviews. He cliff-notes in simpler language complicated theories to spare me a WTF glaze-over in chapter one. And who can resist the use of Spooky in science literature?

END_OF_DOCUMENT_TOKEN_TO_BE_REPLACED

A native of Wisconsin and Connecticut, DT deserted aspirations of being a biologist to live the corporate dream and raise a family. After six homes, a ten-year stint working in Asia, and an imagination that never slept, his muse refused to be hobbled as a mere dream. A member of the Bethlehem Writers Group and social media chair for the Greater Lehigh Valley Writers Group, DT writes dystopian science fiction, paranormal, and alternate-world fantasy. DT appears in the "Write Here – Write Now" short story collection with a middle-grade paranormal, Locker 33C, the paranormal collection, "Untethered" with Hell of a Deal, and a featured author with the "Writers Roundtable Magazine" with Snowbelt Sanctuary and In Simple Terms. His latest project is an apocalyptic tale of humans on the edge extinction, and a young man born years after surviving humans had been rendered sterile. You can find D.T. on his website and his social media links, Facebook, Twitter and Pinterest.