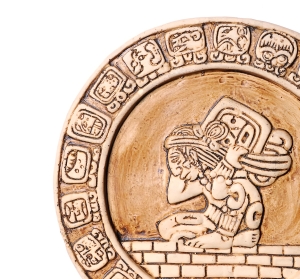 If you’re reading this note, it would appear the Mayan’s have messed up the date
for the apocalypse.  So much for the sacrifice of young maidens who gave their lives to bring you the world’s end.  My heart goes out to them … no pun intended.  And what’s with the poor Mayan with the big schnozzle?

As a writer and aficionado of dystopia, I never run out of fodder for apocalyptic storylines, but even Harold Camping had issues with this one (though it might be sour grapes of the epic failure of his own prediction).  The ages burst with dates that have come and gone.  Nostradamus is one of my favorites. Credited with predicting the French Revolution, the Atomic Bomb, among others, he is considered to have never been wrong.  Smartest of the apocalyptic oracles, Nostradamus offered several dates for the world’s end.  Does 1994 ring a bell?  The year 2000 (further fueled by the Y2K debacle)?  He himself wrote that his prophecies only went so far as year 3797, a good a target as any.

How we meet our end is as varied as beetle species.   I can buy into disintegration by asteroid as a potential scenario.  The solar megaflare theory is also credible and the center of Dashner’s popular Maze Runner series.  Anything else is where vivid imagination runs amok.  Planet X coming out from behind the sun, or Nibiru if you are particular, had to be a carry-over from the cheesy 1950’s movie.  North and South Poles exchanging places, has me wondering if Antarctic penguins will survive, and will they migrate to the North Pole by instinct. Let’s not forget the French equivalent of Spielberg’s Close Encounters movie, where the border near the Pic De Bugarach mountain was closed to alien-seeking tourists.

The Mayan version of our demise has fostered some of the better jokes in memory.  Running out of space on the circular rock of their long calendar is most popular. One gag has Mayan Oracles ending the calendar with knowledge that Harold Camping will take over.  You can get Doomsday Perfume in Turkey if you happen to be in the neighborhood.  Make good stocking stuffer … if we make it to Christmas.

Reaction by survivalists’ should have been our bell weather. They considered the Mayan prediction bunk, and hold more stock in man-made disasters like government collapse, food shortages, and the fiscal cliff.  My latest book plays on a virus plague that wipes out 90% of the world’s population and sterilizes the survivors.  Now that’s an apocalypse you can sink your teeth into.

In a recent article printed in the Allentown Morning Call, Daniel Sheenan interviewed Loa Traxler from the University of Pennsylvania’s Museum of Archaeology and Anthropology.  Traxler said that apocalyptic movements tended to be localized or restricted to particular sects, appealing to the deep human desire to know what the future holds.  She offered a prediction of her own. “Don’t horde Lipton Cup O’ Soup.  We’ll all be here in January.”

I wonder if I can get a refund.